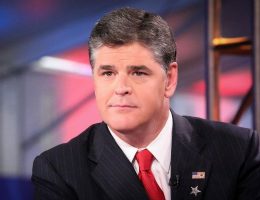 CNN ran a fluff story about how Trump enjoys two scoops of ice cream at the White House cafeteria. Fox news host Sean Hannity mocked CNN for running this piece, even though he ran a story criticizing Obama for eating a hotdog with mustard.

Both on social media, and on his Fox News show, Sean Hannity mocks CNN for reporting that Donald Trump gets two scoops of ice cream in the White House cafeteria. He sent out the following tweet:

Thanks for the hard hitting news on your network @jaketapperhttps://t.co/ieP7VDrNMu #Hannity

Sean Hannity seems to forget about the hard hitting news piece he ran on his show in 2009, where he mocked Obama for eating a hotdog with dijon mustard: